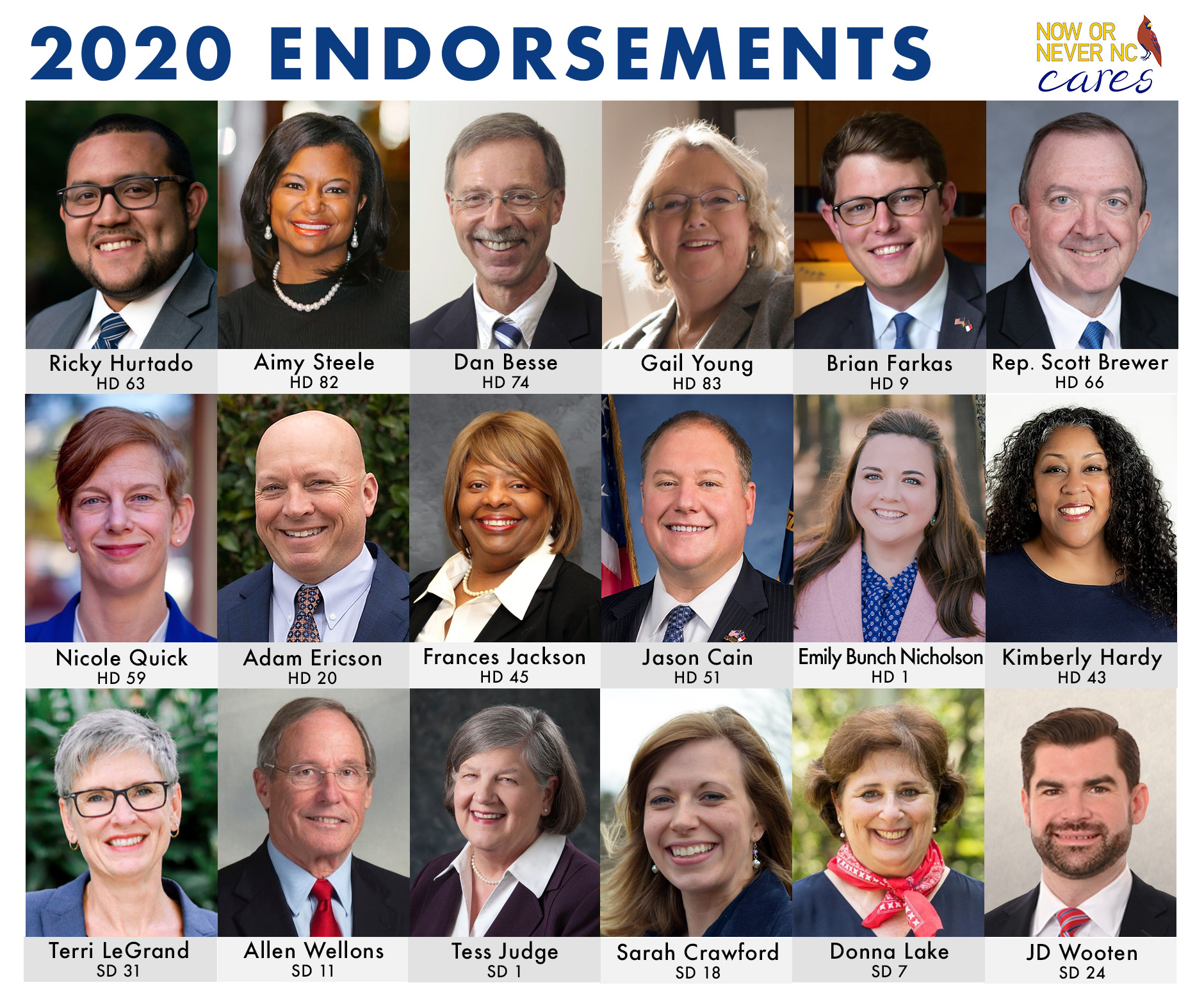 With your help, we’ve barnstormed the State in search of leading candidates. Please join Now or Never NC in making contributions and commitments to each of these candidates.

In 2020, control of the Legislature and subsequent redistricting of Congressional & Legislative districts are in the balance. It's imperative to achieve parity in our State Legislature, including to make redistricting reform a reality. Several of these candidates previously ran in unconstitutionally gerrymandered districts. Let’s not ask more to do the same.

Hon. Dan Besse (HD74: Forsyth) is an attorney and longtime Winston-Salem City Councilman. Dan has been and remains one of the leading environmental advocates in our State. Donate directly to Dan’s campaign.

Donna Lake (SD 7: Wayne & Lenoir): Donna Lake is a retired Air Force Colonel, combat veteran and professor at ECU College of Nursing. This race will be a tough one, but Lake has shown that she is well-prepared and energized to win. Donate directly to Donna's campaign.

Gail Young (HD83: Cabarrus) is a business consultant who in 2018 and again this cycle is taking on the radical Legislator who has compared President Lincoln to Hitler, twice! She’s dedicated her life to public service, spending 26 years working in local government. Donate directly to Gail’s campaign.

Kimberly Hardy, Ph.D. (HD 43: Cumberland) knows firsthand, from her time as an educator and social worker, the impact that a single, dedicated, community member can have. She has worked tirelessly for children, families, and businesses in her district and will take this experience to Raleigh as a legislator. Donate directly to Kimberly's campaign.

Brian Farkas (HD 9: Pitt) is active in the business and civic community in his native Pitt County, where he ran in 2016 in a formerly gerrymandered district. He’s worked with the National Institute of Environmental Health Science specializing in emergency management, and with JFK Architecture, a family business. Donate directly to Brian’s campaign.

Sarah Crawford (SD 18: Franklin & Wake) is a national director with Single Step USA, connecting those in need with access to available resources. She previously worked with the Tammy Lynn Center for Developmental Disabilities. In 2014, she ran an amazingly close race in this formerly gerrymandered district. Donate directly to Sarah’s campaign.

Nicole Quick (HD 59: Guilford)Quick is a 20-year resident of Guilford County and former manufacturing executive. As a parent of a child with autism, she is passionate about education quality, the environment, and voting rights. Her opponent, incumbent Jon Hardister, is the current Republican Majority Whip. This district in the Greensboro suburbs has leaned slightly Republican in the past, but with Democratic turnout likely to increase in 2020, is ripe for a strong challenger like Quick. Donate directly to Nicole's campaign.

Adam Ericson (HD 20: New Hanover)  is a public high school teacher. He believes that the governed deserve real representation, but do not have it today in North Carolina. He is running a bold campaign to invest in North Carolina's education, fight for worker's rights, make health care affordable, and ensure a livable climate for our state's next generation. Donate directly to Adam's campaign.

Terri LeGrand (SD 31: Davie & Forsyth) originally came to Winston-Salem for law school at Wake Forest, and like many, never left. She has built an unapologetically progressive campaign demanding more ethical behavior in the General Assembly.  Donate directly to Terri's campaign.

Tess Judge (SD 1: Beaufort, Camden, Currituck, Dare, Gates, Hyde, Pasquotank, Perquimans) is a successful businesswoman, community leader, grandmother to 10 and resident of Dare County for over 30 years. She is widely known as an advocate for small business and the environment. Donate directly to Tess' campaign.

Jason Cain (HD 51: Harnett, Lee) is a US Army veteran and Special Operations soldier. Having served five combat tours in Afganistan, he has dedicated his career to serving our country and standing up for veteran's rights. His service has extended to his community as an educator, and an advocate for those suffering from the opiate crisis in North Carolina. Cain holds degrees from George Washington and Harvard University and plans to use his diverse experience in public to further serve our State. Donate directly to Jason's campaign.

Frances Jackson, Ph.D. (HD 45: Cumberland) Dr. Jackson is a respected leader, educator, and advocate. She grew up in Cumberland County and is a proud graduate of North Carolina A&T, Fayetteville State University, and Walden University. She has spent her career working as a high school teacher and in multiple roles in county government. If elected, she would be both the first woman and the first African American to win in this district. Donate directly to Frances’ campaign.

Together, we'll get North Carolina back on track. The way we do that is by backing top candidates now.

Thank you for your support,