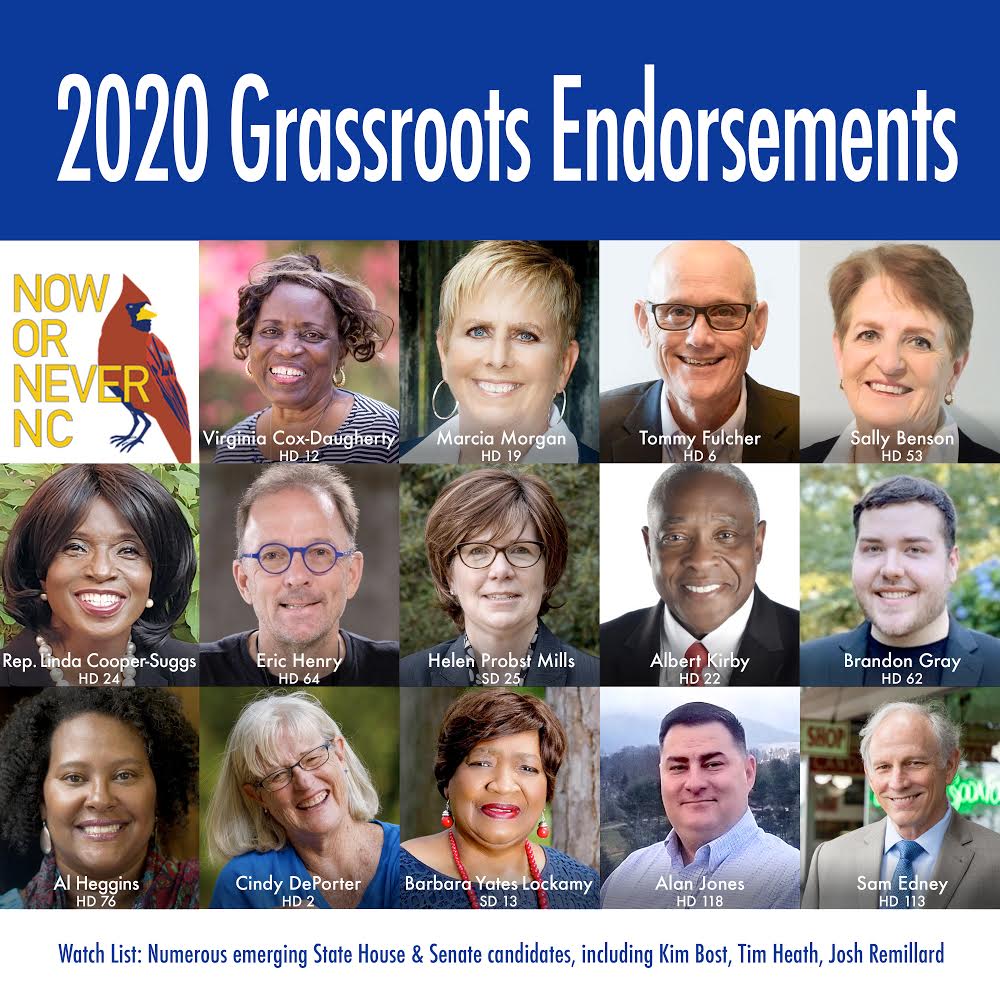 Now or Never NC was formed to support top challengers running strong campaigns in our gerrymandered State. With an analytical approach starting with the most competitive districts, great candidates, and you, we’ve helped flip 15 State House seats.
Still, there are any number of highly principled candidates running in exceptionally tough districts, standing up to uphold and defend our democratic values where they are. And plenty have made up a lot of ground in a short amount of time.

With that in mind, we’re excited to offer our final “Grassroots” endorsements of the following candidates:

Virginia Cox-Daugherty (HD12, Lenoir & Pitt Counties) is a native North Carolinian, Craven County. She’s a graduate of Elizabeth City State University, also earned MBA and doctoral degrees in Education and Theology. Former educator (principal, director, grant writer) who has spent an abundance of time volunteering and giving back to the community, including as a member of the Lenoir County Board of Elections. www.virginiacoxdaugherty.com

Marcia Morgan (HD19, New Hanover & Brunswick Counties) is a retired Army Colonel and former university instructor (Smith College, UC-Berkeley) now residing in Carolina Beach. She’s the youngest of four children raised by a single parent, upon her father’s passing at age two. Her mother was a school librarian, Vice Principal. She ran a phenomenal campaign in 2018, putting a previously uncompetitive district on the map, though perhaps too much so, as the Wilmington-area districts were subsequently reconfigured, adding an entirely new county (Brunswick) to her new district. Marcia is again making a difficult seat highly competitive. She has served our nation honorably, and will bring that commitment to service to the General Assembly. www.ElectMarciaMorgan.com

Sally Benson (HD53, Harnett County) filed to run against State Rep. Lewis, before he retired and pleaded guilty. Now she’s running in a open seat. Sally retired as a Commander in the United States Navy, and returned home to NC. In service, she worked closely with Chairman of the Joint Chiefs of Staff Hugh Shelton. She and her husband have lived in the Coats area for 18 years and volunteered with numerous Harnett County organizations. North Carolina is fortunate to have her back home. www.sallyfornchouse.com

Rep. Linda Cooper-Suggs (HD24, Wilson County) is a former educator and a life long resident of rural NC. Her story started as one of seven children growing up in Sampson County. Growing up in a large family and a farming community, she learned that hard work does pay off.  Chosen to fill the seat left by longtime Representative Jean Farmer-Butterfield, Linda is a worthy successor. She previously served as Chair of the Wilson County Democratic Party. www.lindacoopersuggs.com

Eric Henry (HD64, Alamance County) of Snow Camp, has been an Alamance County resident since childhood. Eric grew up on Front Street in Burlington, developed a passion for sustainable food and fiber systems. Eight years ago, he and his wife of over 30 years moved from Burlington to Snow Camp to get hands back in the soil. In 1978, his entrepreneurial journey began as a NCSU student starting t-shirt business he later merged with TS Designs, been with the company over 40 years. TS Designs became first certified B Corp in North Carolina, balancing purpose alongside profit. www.ericfornchouse.com

Helen Probst Mills (SD25, Anson, Moore, Richmond, & Scotland Counties) grew up poor, child of single mother. She believes that public education was the key to a better life for her, and is the key for all children. Helen attended college and law school, working in the Legal Department of the Federal Reserve Bank of Cleveland in school and afterwards, with the Federal Home Loan Bank of Chicago. She’s a breast cancer survivor who was appointed by Governor Cooper to be a Sandhills Community College Trustee. Her top priorities include expanding Medicaid and ensuring funding for our schools. www.HelenForNCSenate.com

Brandon Gray (HD62, Guilford County, including High Point) is a lifelong resident of Oak Ridge, Guilford County. He attended Guilford County Public Schools and graduated from Guilford Technical Community College in Political Science. Brandon is openly-gay, standing up to run in an emerging purple district, following on the valiant candidacy of Martha Shafer in 2016. www.brandongraync.com

Al Heggins (HD76, Rowan County) is the first African American woman elected to the Salisbury City Council. She served as mayor, another historic first for the City, now serves as the mayor pro tem. Born in Concord and raised in southern Rowan County, Al is a mother and grandmother. A 19-year veteran of the U.S. Army, Al is fluent in Spanish and earned master’s and bachelor’s degrees from UNC-Charlotte. Heggins’ career includes public education as a school teacher and college administrator, as well as owning a small business. In 2013, she was selected by President Obama as a White House Champion of Change for exemplary work as Human Relations director for nearby City of High Point. www.alheggins.com

Cindy DePorter (HD2, Granville & Person Counties) was raised in Western North Carolina and now lives in Granville County working for the Department of Health and Human Services (DHHS) in Raleigh. She has a Master’s Degree in Social Work and has worked in healthcare her entire professional life. State Agency Director for DHHS Health Service Regulation, educating providers about federal nursing home regulations and is a tireless advocate for the elderly. Federal liaison for Centers for Medicare and Medicaid Services, overseeing 17 federally funded programs. www.cindydeporter.com

Barbara Yates-Lockamy (SD13, Robeson & Columbus Counties) is a lifelong resident of Columbus County. Barbara was raised in a farming community, sprouted from humble beginnings. Much of family has been in farming. She’s attended Columbus County Schools and is a graduate of NC A&T. She obtained her master’s degree in education and has worked with Columbus and Robeson County students. www.barbarayateslockamy.com

Sam Edney (HD113, Polk, Henderson, Transylvania Counties) is a farmer born and raised who has spent his whole life in western NC, where his family has lived for generations. Sam attended Valley Hill School and Flat Rock Jr. High, graduated from East Henderson High. Graduate of Asheville-Buncombe Technical College. Sam worked as an industrial engineer for 18 years, the last 12 with Ecusta Paper in Brevard. In 1988, Sam purchased Pisgah Pest Control in Brevard, a company today with four branches and 26 employees. He knows what it is to set a budget and meet a payroll. www.electsamedney.org

We urge you to learn more about these candidates via their websites, and to join us in supporting their candidacies as you can.