As a volunteer-led organization with limited overhead, NNNC works to maximize the impact of your contribution. If you’d like to donate directly to a specific candidate or candidates (in addition to or instead of Now or Never NC), you can do so here:

The majority of Now or Never NC alumni & all our new 2022 endorsed candidates are running in highly competitive races for which financial and volunteer support is necessary and highly impactful. 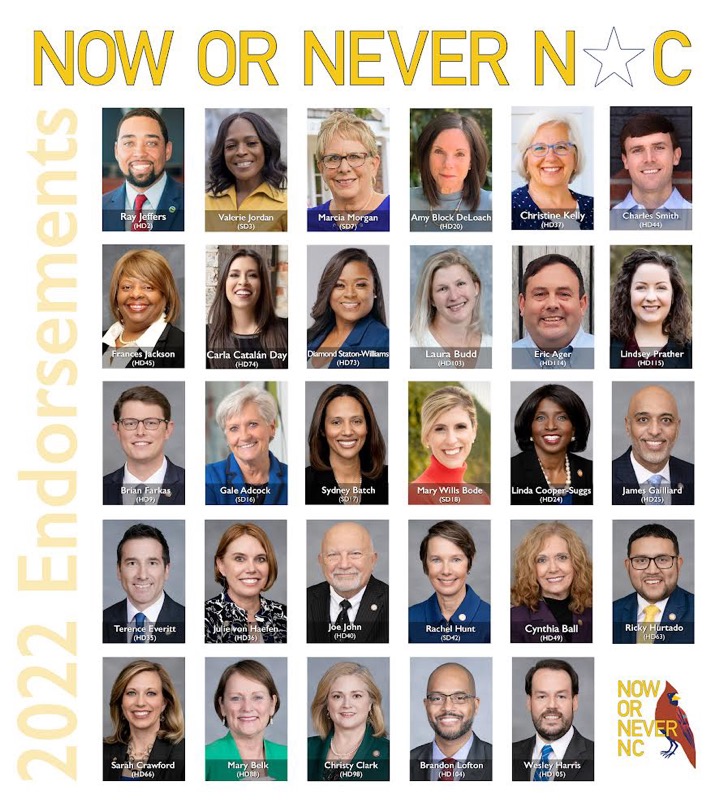 With your help, we spent the spring and early summer focusing on our 16 alumni running this cycle, most in newly drawn, competitive districts not finalized until early this year. We also have three retiring alumni (Representatives Ager, Richardson, Turner) whose successors are poised to provide exceptional leadership.

They are vital to “Hold the Line” for Governor Cooper's veto and reproductive rights, and to vigorously support public education and forward-looking initiatives that have made North Carolina a beacon in the south.

Valerie Jordan (SD3) was raised in the tobacco fields of Warren County. She later paid her way through NC Central University. She was appointed by Governor Cooper and is the first African-American woman to serve on the NC Department of Transportation board.

Marcia Morgan, Ph.D. (SD7) of New Hanover County is a retired Air Force colonel and ROTC instructor who served two tours at the Pentagon. She’s committed to supporting our environment, public education, equality, and the economy.

Mary Wills Bode (SD18) is a Wake County native and Granville County resident, non-profit executive director, and attorney. She’s a longtime advocate for nonpartisan redistricting reform and of bipartisan solutions, and has headlined Now or Never NC events in the past.

Ray Jeffers (HD2) is a Person County native and graduate of NC A&T State University. In 2008, he became the youngest county commissioner in North Carolina, serving 12 years, including as Chairman, President of the NC Association of County Commissioners, and five terms on the National Association of Counties board.

Amy Block DeLoach (HD20) is a Wilmington native with deep roots of service. Her grandmother was Mayor Pro Tempore, her father a State Senator. Amy’s charted her own path, serving on numerous impactful nonprofit boards, including President of PTAs and current President of Bnai Israel Congregation.

Christine Kelly (HD37) grew up in a small, interconnected town in Canada. She and her family have made Holly Springs home since 1992. She served four years on the Holly Springs Town Council, leading successful efforts to recruit new small businesses.

Diamond Staton-Williams (HD73) is a registered nurse (graduate of UNCG and Pfeiffer) and member of the Harrisburg Town Council in Cabarrus County. Her nonprofit board and volunteer service has been focused on mental health and child achievement, including Communities in Schools, a program in which she participated as a youth.

Carla Catalan Day (HD74) is a graduate of West Forsyth High School and Western Carolina University. She returned to Winston-Salem to begin her public health career (Maternal Child Health Educator) and for her husband to start in law enforcement. Her campaign is rooted in the working class values of her experience and district.

Laura Budd (HD103) grew up in an Air Force family. She’s a graduate of Wake Forest Law School, a managing partner in her Matthews-area law firm, and a member of the Matthews Chamber of Commerce. Her nonprofit service includes the Mecklenburg County Bar Association board and helping lead recreational sports and gymnastics organizations.

You know the stakes.

Please financially support these exceptional candidates (click this link) and/or volunteer via the candidate websites listed within it.

Over four election cycles, Now or Never NC has backed top challengers in the most competitive State Legislative districts to Break the Supermajority, with special thanks to exceptional candidates, their campaigns, and you.

Our alumni now comprise one-third of the Democratic Caucus in State House!

Following decennial redistricting, and a presently difficult political environment, our first goal is to protect those gains. In 2022, their candidacies are our utmost priority, to “Hold the Line” to prevent a Supermajority’s return.

We’re supremely grateful to endorse our 16 alumni running in new State House and Senate districts, 10 of whom are running in particularly competitive districts for which support is critical.

We’ve established our alumni “Hold the Line” link on ActBlue to facilitate direct investments in their candidacies. (Click this link.)

Read more about their winnable race candidacies by clicking the links on this page.